It is the day after Canada Day and since it fell on a Sunday, today is considered a stat holiday here so to start off my set of blogs on those I have met with HOW I felt the best way would be to acknowledge the Canadian Duo. Dave Gouveia and Chris Elkerton.

Chris has been featured on this blog previously. We met last year in Chicago after I was introduced to him by my new HOWie friends. I took the time to attend his second run session called ‘creative stuff’ and was blown away by his honest and humbling experience in the business. He had a sincere respect for everyone in the field and the one quote from his session that really hit home…

Don’t trash talk other designers… keep it to yourself. We in our industry need to support each other – we get enough criticism outside of our field, never mind our own heads. (Please note this is not verbatim…but the gist of his message.)

Since Chicago I kept in touch with Chris and kept hearing about the other ‘Dogs’ and with Chris’s book coming out with his old partner, Dave Gouveia – I was intrigued to meet the man. I had a chance to ask Dave a couple questions and get some feedback on my iNotes design. He was gracious, critical, but very honest and sincere which really is all you can ask for when you request feedback on design.

Since 3 Dogs went their separate ways Dave has been working with Chris on their book while keeping up freelance working for their previous clients as well as welcoming his son into the world and experiencing fatherhood. As a mom of two I have to admit I get a kick out of first time parents, mostly because I was one, there is something to be said for having a second child… you learn to relax a bit more – I just wish first time parents (me included) would actually head the advice.

Creativity in it’s purest form is about sharing.

I made a point of getting in to see their session ‘Making Stuff Happen’ and I was really pleased with what they managed to put together with a title that had the word ‘stuff’ in it. From what my PHLE brain can recall, they started off with a small introduction of their history as designers and then together from the studio. The banter they have due to their longstanding friendship really made for a dynamic presentation. I wasn’t in fear of glazing over any dialogue. Though their ad hoc book cover design didn’t turn out well I think it was a great example of trying and well admitting when something doesn’t work, then just moving on. 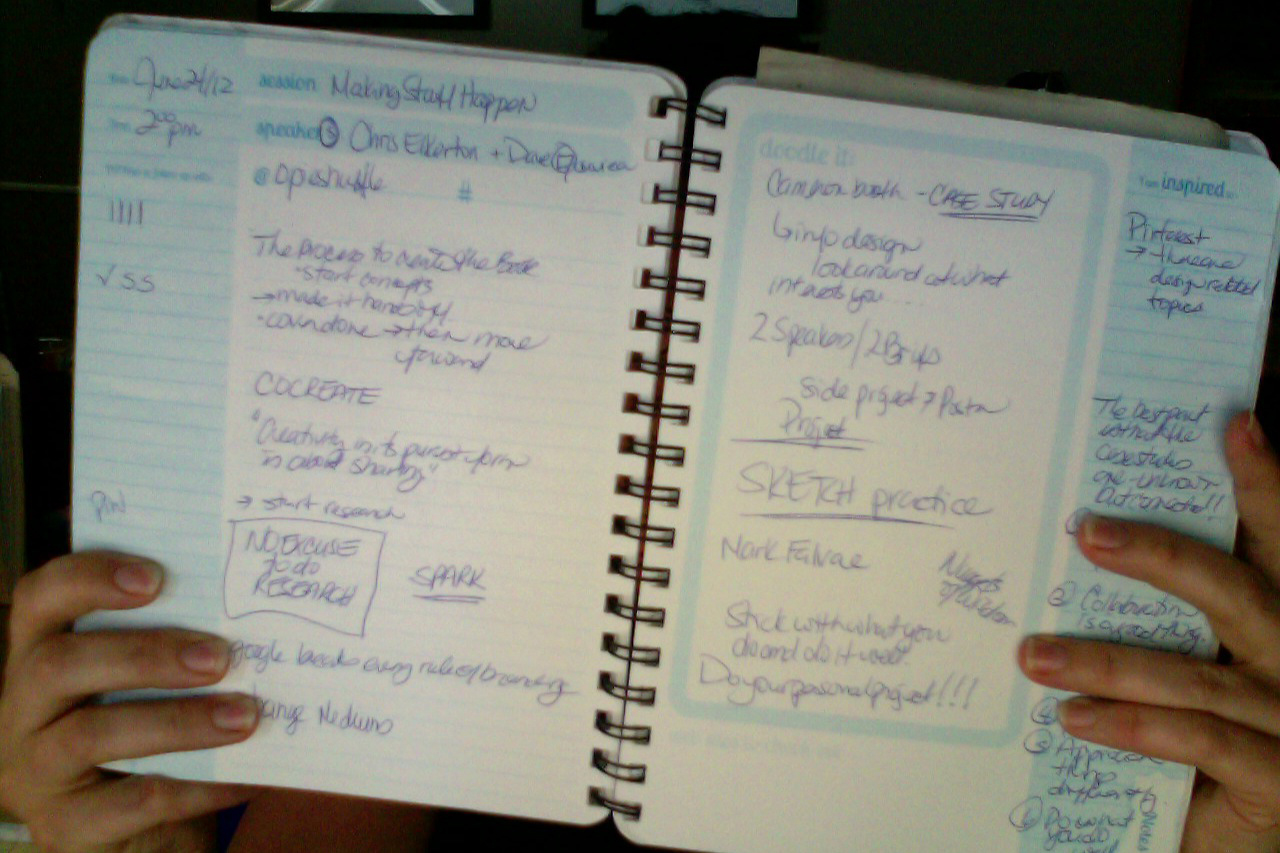 Their key points I wrote down were:

Of all the points, I loved the message on collaboration. Dave and Chris talked about how they worked and pushed each other during the writing of their book and it was because of the collaboration and feedback, their work improved. I have finally had a chance to read their book, I will admit I was a little skeptical about the concept, but I have to admit – there is brilliance in these pages. Creative Stuff is what I would consider a must have for a designer looking to expand their creative mind.

On an end note – but not really the end I hope – I have to say the best part of getting to know someone is when you have the chance to really get past the initial meet and greet. When I came home Dave followed up on Facebook and I learned about another creative passion of his. I will leave those details to Dave to share – but I have to say, he is MORE than just a designer. He is a designer with a voice worth hearing.

I consider myself really lucky to have met these guys and really look forward to seeing where their next blank canvas will lead them. Knowing their sincerity and passion for what they do – I won’t be surprised by more greatness.