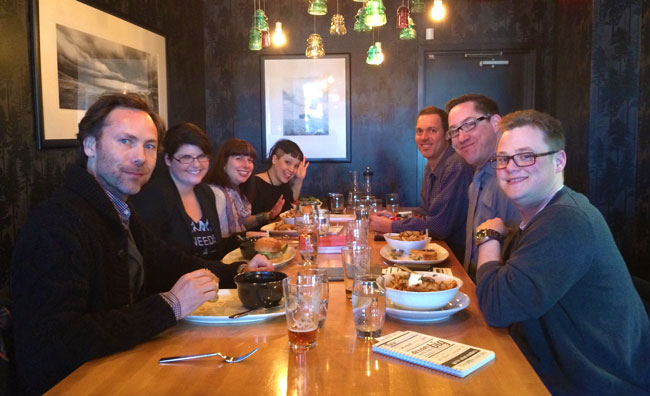 I just got back from the second lunch of the 2014 season. Things were looking good this year with my next two lunches being ‘sold-out’ so quick. Kept the number to eight and ended up with 2 cancellations and one pick up, so overall, it turned out ,I think, the way it was supposed to. The mix today was perfect, a couple regulars, Brett Gilmour, Christine McGavern and Lindsay Harle and then three newbies! All attendees (yes, Brett, yours will be in the mail) were gifted a copy of the myDay planner – more paper goodies. We met up at local sensation, NOtaBLE, always tasty and an great and energetic environment.

We had the pleasure of meeting Jamie and Richard from Chirp Media . They came upon the lunch when Jamie was perusing eventbrite for meet ups with a focus on creatives and lucky for us, he found this one. Jamie and Richard are collaborators in their recently created studio that is made up of themselves and a couple other creatives. In conversing with Jamie, I learned Jamie is from the west coast and recently moved here a year or so ago. He has found it a challenge to find a non-clicky creative community. Well I hope his searching has ended. Creatives’ lunch is NOT about any clicking.

The gem of the bunch was to meet Dean Foster, an illustrator who has moved to our hometown all the way from South Africa. The move was in part to find a better life for his family and he has found the challenge is getting back to his skills in illustration in our fair city. His challenges are not unlike the same ones we all face. Not only is he foraying into getting back into being a solopreneur but doing so in a new country with different views and rules from where he is from. When I told him about the lunch, he was taken aback by the openness of the idea of creative peers meeting and sharing stories, being open and friendly. His experience in his home country was different, much more competitive and less friendly. He asked if this friendly thing is a ‘canadian’ thing, which I would like to think is true – but the fact is I KNOW that there are many other creatives around the world whom I have been lucky enough to meet, have the same ideals of supporting fellow creative peers. At the very least, I hope Dean felt welcomed.

I participate in an online accountability group, Designers Roundtable, and was sharing my stories of those I have met from setting up these lunches. I was thrilled to hear a couple designers from other countries/cities say how they were inspired to start their own similar lunch style connections and I really hope they do.

The next lunch is happening in April and outside of meeting the full team of Chirp Media, I look forward again to sharing a meal with fellow lovers of the creative profession. In the past couple months I have met a photographer moved here from Russia, an illustrator from South Africa and more local creatives that just seem to come out of the woodwork. I encourage you all to come out of hiding and meet your own local creatives. Who knows what we can all creative when we put our heads together.