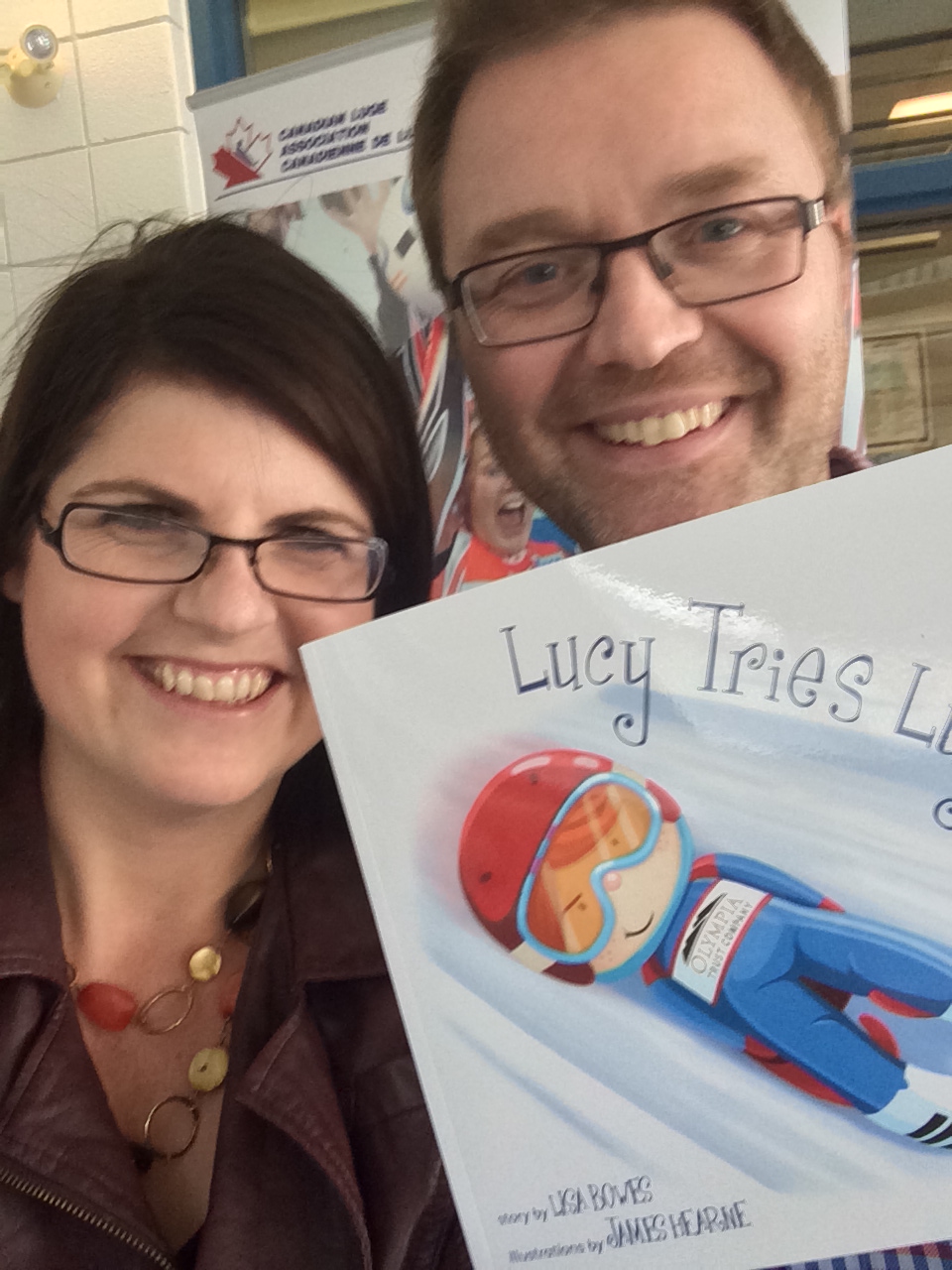 My first local creative connection was with James Hearne. I met him while admiring his art he was selling as cute and adorable children’s clothing. At first glance I was smitten with his style. From there we would meet up for coffee and lunch, basically sharing our stories of working freelance. I loved his story.

Originally from the UK, James and his wife Paula travelled Canada on a holiday about 15 years ago (it could be more), and found they loved it so much they chose to stay. James at the time had been working freelance with an agent back across the water. I loved it when I would pass through COSTCO and see his illustrations on christmas cards and wrapping paper, in fact, James had even seen his art on some tea towels, surprising to him since he never heard of it’s usage. That was a great story he shared about contacting the company who produced them and proving his copyright and the misuse of his art, with a decent ending where the company came through with apologies and providing a return in value. One of the challenges when your art is sent overseas.

His work has been used around the world, in fact, some of his illustrations have been used by UNICEF for their holiday greeting cards, which I snagged a set at a kiosk in IKEA one day. After doing years of christmas themed images, not surprisingly James had been itching to try something new, hence his try at selling his illustrations as embroidered children’s onsies and t-shirts. The trial didn’t take off, but his drive to expand his opportunities haven’t. Thank goodness, not only has he now have a children’s book under his belt, but he is looking at other media and platforms to share his art.

When I first started my first Creatives’ Lunch back in 2011. James was skeptical about what exactly was the benefit of attending and meeting other creative professionals. Needless to say a year later he humbly admitted his scepticism to me and how right I was. Not only did he have a chance to meet with others and learn from each other, he began working with a copyrighter from the Calgary Zoo, creating custom creature illustrations for their newsletter and other promotional pieces.

After that, he met Patrick LaMontagne of Cartoon Ink. It was after Patrick was approached about working on a children’s book that he declined as it wasn’t the type of direction he was looking to work in and so he referred James. The rest is history and “Lucy Tries Luge” by Lisa Bowes, one of the sports anchor/reporters for CTV Calgary News.

I made the effort to pop by the media launch today for the book and was blown away. The book itself is a story about a girl who gives the sport of luge a try. James shared with me how he had visited Canada Olympic Park to get reference images for his illustrations in the book. Some great work when you get to see his ability to showcase the park’s luge in a fabulous perspective.

Yes the book is amazing, but what really blew me away was how the author, Lisa collaborated with the school board, the canadian olympic luge team and supporters of sport for kids to create an event that created excitement for the 100 kindergarten children about winter sports. I have a personal love of the character, Lucy. Not only is she rocking the sport with courage, but my daughter is named Lucy – wanna guess what will be in her christmas stocking this year?

I learned a lot about how to launch with flair. All I can say is well done Lisa (and the team I am sure that is supporting her)! As it stands I have been having a hoot seeing the media talk about the launch on twitter and on my own local news networks. James is flabbergasted at seeing himself on television! 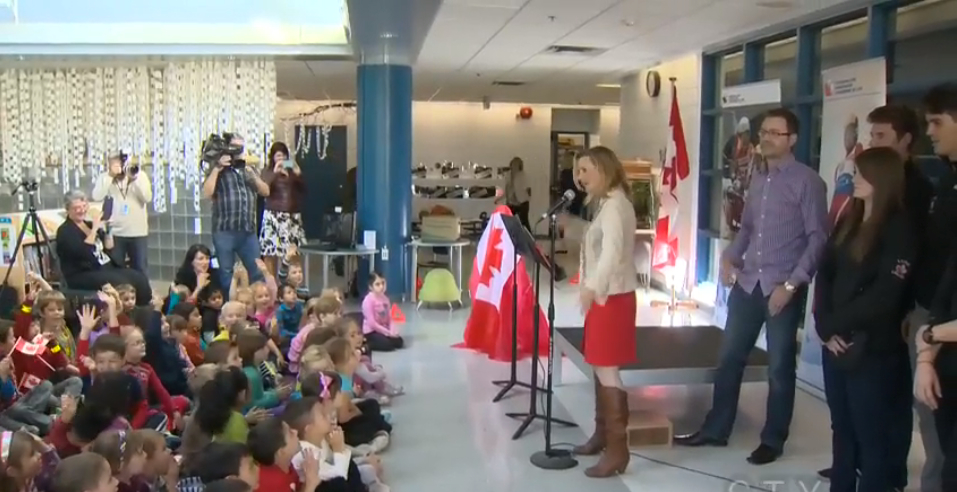 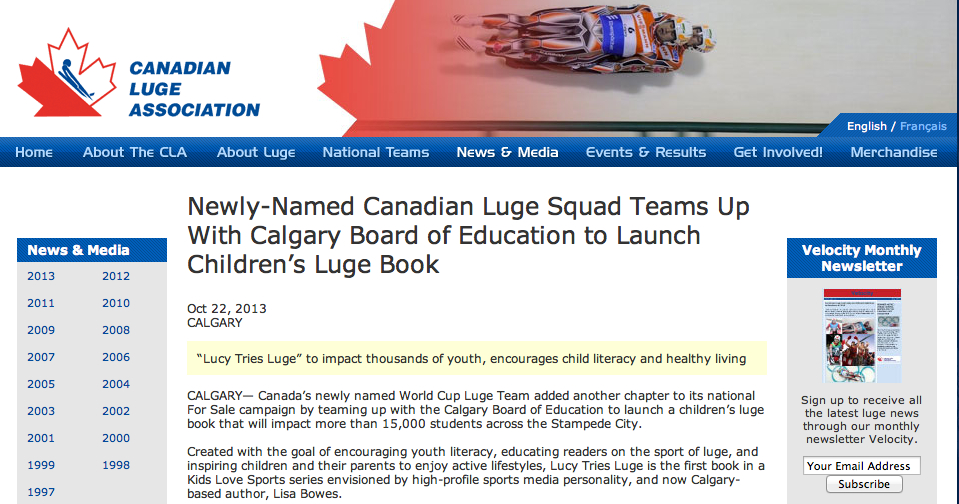 Kudos to a brilliant illustrator – I understand the humbleness of not really seeing the value in your work until you get outside affirmation – so enjoy this James and know that it is well deserved! 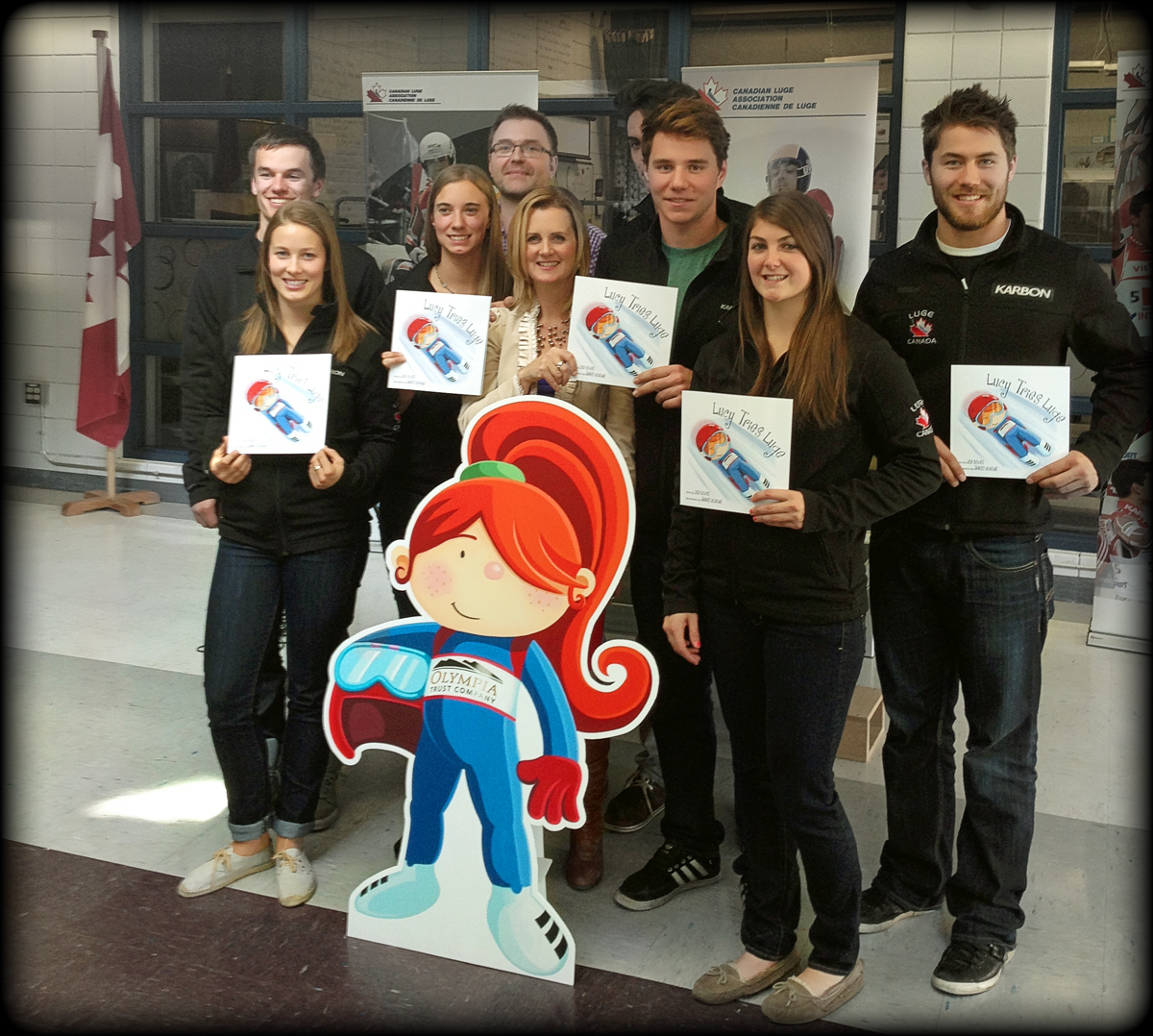 One thought on “A Creatives’ Lunch Success Story”